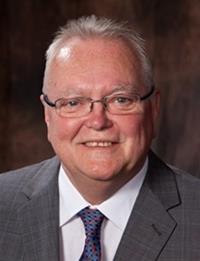 Jim was elected to Stockton-on-Tees Borough Council in May 2007 after more than 30 years working in local government, mostly in a social care environment, from Care Assistant to senior manager, encompassing both childrenâ€™s and adult services.

In 2010, Jim became the Cabinet Member for Adult Services & Health then Deputy Leader in May 2011 retaining his existing Cabinet portfolio. He has been a member of the Planning and Licensing Committees and Cleveland Fire Authority. He chairs the Stockton-on-Tees Health & Wellbeing Board (HWB) and the Tees Valley HWB Chairs Network. Since 2016, Jim has been a member of the Local Government Associationâ€™s Safer and Stronger Communities Board and is a Domestic Abuse champion.

Jim has extensive experience and involvement in governance in the community & voluntary sector.  He is Chair of Governors of Rosebrook Primary School in his Ward.  He is also the Chair of Eastern Ravens Trust, a local charity which delivers services to disadvantaged children and young people including young carers.

Jim is married, has one surviving child and three grandchildren.  In his free time, he enjoys reading, holidaying abroad, live music and following Middlesbrough Football Club.