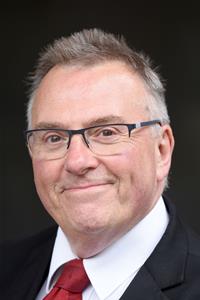 Tudor is the Leader of Plymouth City Council and in his 32nd year of continuous service to the Ham ward as a Labour & Co-operative Councillor. He has been the Leader of the Plymouth Labour Group since May 1998.

Tudor was born in Ebbw Vale, South Wales and is an Environmental Science graduate having arrived in the city in 1977 to read environmental science at Plymouth Polytechnic – now Plymouth University. He was a director of a co-operative printing company for 11 years and is currently working as a local government consultant. His partner Jane is Head of Public affairs at GWR and he has two step-daughters, and is Bampy to Issac, Bodhe and Hudson.

Tudor was awarded the Order of the British Empire for political service and services to local government in the New Year’s Honours list in 2016.  He is a member of the GMB trade union and the Co-operative Party.

Tudor is a Vice-Chair of the Local Government Association’s Leadership Board and also a member of the LGA’s Councillors Forum. Tudor has previously served as the LGA’s Regional Lead Peer and has worked with a number of Councils on peer reviews. He is also a mentor to other Local Authority Leaders.

Tudor has been a member of many organisations in local, regional and national council affairs since being elected in 1988, including: