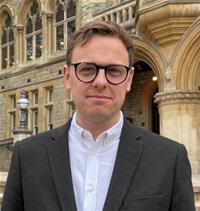 Peter Mason is the Leader of the London Borough of Ealing. First elected as a Labour councillor in 2014, he represents the area of Southall Green. Before being elected Leader in 2021, he served in cabinet in various portfolios including housing, planning, skills & employment as well as public service reform and transformation.

Professionally, he is a trained town planner holding a master’s in urban regeneration from the Bartlett School of Planning. Prior to taking over the leadership at Ealing he was the head of public sector at a leading digital engagement PropTech company. A member of the Old Oak Park Royal Mayoral Development Corporation, he is a frequent commentator on the issues of power and identity in the built environment.

Politically, Peter serves on the Labour Party’s National Constitutional Committee, the London Regional Executive and was National Secretary to the Jewish Labour Movement between 2013-2021. He is a member of the Co-operative Party and Unison.